What Value Do Fibonacci Numbers Have as a Research Tool?

The Fibonacci sequence is a popular trading instrument. It’s critical to any trader who wishes to profit from the scientist’s scientific legacy to first understand how they’re used and whether they can be trusted to measure market volatility.

While some traders undoubtedly rely on Fibonacci tools to make important trading decisions, others regard the Fibonacci studies as odd scientific baubles that may be experimented with by so many traders that they can even influence the market.

In this post, we look at how Fibonacci numbers, when used as a research tool, can influence markets by winning traders over.

What Are Fibonacci Numbers?

Fibonacci numbers are a sequence of numbers in which each number is the sum of the previous two. They were first studied by Leonardo Fibonacci, who introduced them to Europe in the thirteenth century.

The Fibonacci sequence is as follows:

The Fibonacci sequence gradually approaches a specific, irrational ratio. In other words, it becomes a number that is made up of an infinite, unpredictable stream of decimal numbers that cannot be precisely described. Let’s use the number 1.618 as an example to keep things brief.

The sequence has also been called “the golden average” or the “golden section.” It is represented by the Greek letter Phi (Phi = 1.618) in algebra.

The asymptotic behavior of the sequence, as well as the fading fluctuations of its ratio around Phi, might be better understood if various first members of the sequence are linked. 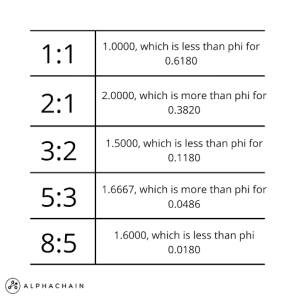 As the Fibonacci sequence progresses, each new member will divide the one that came before it, approaching and then surpassing the impossible phi. When employing the Elliott wave concept, fluctuations in the proportion around a value of 1.618 for a lesser or greater amount can also be detected.

It’s been said that people unconsciously seek out the golden ratio. For example, Traders are often uncomfortable with seeing excessively long trends. Chart analysis and natural phenomena, to that extent, have a lot in common: things that follow the golden proportion are beautiful and graceful, while things that do not appear attractive or natural fall outside of it. This, in part, explains why we feel that something is amiss when a trend strays too far from the golden ratio.

The Fibonacci Sequence and Its Use as a Trading Tool

Arcs, fans, retracements, extensions, and time zones are the five types of trading instruments that are based on Fibonacci’s research. The lines produced by these Fibonacci studies are supposed to signal changes in trends as the prices approach them.

How Fibonacci Numbers work as a trading research tool

Fibonacci tools are regarded as one of the most reliable predictors of market movement. According to popular belief, when properly utilized, they may correctly forecast market behavior in 60% of cases, particularly when a particular price is anticipated.

Some traders feel that computations for several retracements are too time-consuming and difficult to use. Perhaps the Fibonacci technique’s greatest disadvantage is that the conclusions for comprehension and the inability of many traders to truly comprehend them are complicated.

In other words, traders should not use Fibonacci levels as mandatory support and resistance levels. In reality, they may be nothing more than psychological comfort levels as well as another perspective on a chart.

As a result, it could be argued that the Fibonacci levels are a sort of frame through which traders look at their charts. The frame does nothing to predict or contribute anything but can affect the decision-making of thousands of traders by potentially forecasting market behavior

So, are Fibonacci numbers valuable as a research tool?

Traders who are not familiar with the Fibonacci sequence need to understand that, although it has several applications in different fields, its use as a trading tool is not always beneficial.

Fibonacci research is only most effective when no significant market-driving forces are in place. It’s self-evident that the levels of psychological comfort and the “frame” it offers traders – through which most traders view their charts – as well as the reasons for prices’ rise or decline that they make up, aren’t always the primary factors behind those situations when more relevant reasons for price growth or reduction (such as real-world events noted on trading Twitter) exist.

However, the Fibonacci studies do become a major factor in influencing the market if they are being utilized by many traders at the same time. This is because, a majority of the time, Fibonacci research is made successful due to the cascade effect, which results from a huge number of traders artificially generating support and resistance levels by utilizing the same trading psychology the sequence offers.

The financial markets are a complicated system, and understanding the true nature of Fibonacci studies as a self-fulfilling prophecy will aid you in using the technique more effectively. How? It’s really simple: it’ll enable you from getting too reliant on tools like it.

Fibonacci numbers should only be used in conjunction with other trading research methods, and the findings should only be regarded as additional evidence in favor of a decision if they match the results generated by the rest of the methods in the combination.