How the GDP affects the forex market?

How does GDP affect currency?

You may have seen economists and policy analysts on TV discussing the size of an economy. Most of the time, experts are referring to the most important indicator of economic growth and size: Gross Domestic Product, aka GDP. But why should you care about GDP as a forex trader? Does it affect your trading strategies?  The short answer is yes. We’ll discuss the long answer about forex GDP in this guide. So, let’s get started!

What is GDP anyway?

The overall worth of goods and services generated in a country during a given period is referred to as GDP.

Because experts regard it as an indicator of the economy’s total size and health, it is one of the most detailed and frequently monitored economic data.

GDP informs us if the economy is increasing by generating more goods and services or shrinking by producing less output compared to previous periods.

It also informs us how one country’s GDP compares to the economies of other countries across the world.

The GDP of a nation includes both private and state spending and output. Government expenditure, corporate and consumer consumption, investment, and net exports are all included in the figures.

GDP is usually computed on an annual basis, although it may be calculated for any period.

Why is GDP important?

GDP is a key indicator of a country’s economic development, health, and size, and it has a significant impact on financial markets. The rate of growth in our economy impacts company conditions, investment choices, and whether or not employees can find work.

When GDP increases, the economy is said to be doing well. As firms recruit more employees, employment is projected to rise, implying that individuals will have more money to spend. This, in turn, creates additional business, perpetuating the cycle.

When the economy shrinks, firms cut back on output and expansion, and employees are laid off. Governments don’t incentivize businesses to expand and hire more workers when the GDP isn’t growing quickly enough, which fuels the stagnant or negative cycle.

When it comes to interest rates, taxes, and trade policies, policymakers will consider GDP.

Policymakers may assess whether the present monetary policy stance is compatible with that primary aim by tracking developments in the overall growth rate, the unemployment rate, and the inflation rate.

How GDP impacts the forex market?

Economic data releases are important for any forex trader, particularly those of critical relevance, such as a country’s GDP.

The GDP report categorizes as a Tier 1 publication, which means it has a significant effect. When a report is issued, markets tend to move significantly, and volatility rises based on how far the actual outcome differs from the projected projections.

A number of factors influence the impact of a GDP report on a currency or currency pair. As a result, don’t anticipate markets to react the same way every time a GDP report exceeds or falls short of expectations.

GDP indicates expansion in a productive economy while indicating a decrease in a sagging one. As a result, if you’re a forex trader, you’ll want to look for greater GDP or growth rates in the hopes that interest rates will follow suit.

When an economy grows at a healthy pace, the advantages flow down to consumers, boosting the chance of spending and expansion. As a result, greater spending leads to higher prices, which central banks try to control by raising interest rates.

A key point to add here is that positive growth is always beneficial to the economy, but not when the final GDP figure falls below. So, as a trader, you have to look at the broader GDP figures rather than focusing on specific data.

What do you need to know?

There are three basic reactions to a forex pair’s price that you need to know as a forex trader:

Traders are more likely to observe a sell-off of that particular local currency in respect to other currencies if the GDP figure is lower than predicted.

The more a GDP figure falls short of expectations, the more the currency falls.

GDP numbers that are in line with expectations need a little extra attention from the forex trader. First, the trader needs to compare the current number to the prior quarter’s or year’s data to better understand the currency’s economic position.

As a result, the price movement will likely be mixed, as the market takes time to figure through the situation and the report’s specifics.

Higher-than-expected GDP figures will almost certainly boost the dollar with respect to other currencies.

A greater US GDP rate, for example, will benefit the dollar, causing it to increase in value against other currencies. The stronger the growth in GDP, the stronger the rise in the value of the dollar.

Let’s illustrate how GDP affects the forex market with an example:

The US Bureau of Economic Analysis released the fourth-quarter GDP results for the country on January 28th. There was an increase at an annual rate of 4.0% in the fourth quarter of 2020.

Now, on the chart below, you can see there was a downtrend after the report was released. This is because this report was taken as an indicator for a stronger greenback by investors, and hence we had a drop in EUR/USD. 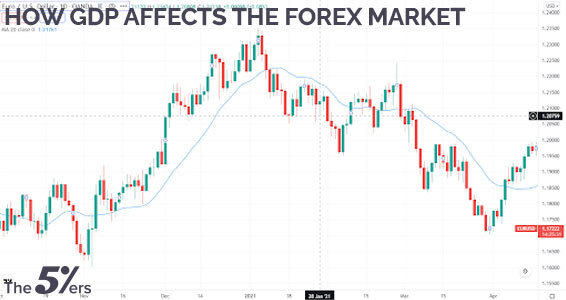 To recap, GDP reports are one of the most influential economic indicators/reports, with the potential to influence exchange rates and monetary policy choices. As a result, you need to know GDP figures at all costs, especially if you are trading pairs involving USD.

Also, you shouldn’t just look at the GDP figures; think about how they’ll affect the larger market backdrop, such as monetary policy expectations.

Make Peace With Your Fear of Losing in Trading and Start Managing it
Stop Self Sabotaging and Losing Money in The Market
What is an Automated Forex Trading System and How Does it Work
Understanding The Overall Concept of The Freestyle Factors
Get Comfortable With Your Trading Routine to Maximize Your Trading Results
What Value Do Fibonacci Numbers Have as a Research Tool?
Follow us: