Are You a Revenge Trader?

While it may sound like the newest superhero saga to appear in the Marvel Universe, the Revenger Trader is anything but a hero.

On the contrary, revenge traders are to be feared and avoided. They are traders who fail to admit when their trades are going towards a loss or who refuse to accept that they’re losing and missing their daily goals.

These anti-heroes have a very negative sense of failure and generally, want to overcompensate. Look yourself in the mirror and ask yourself – “Am I a revenge trader?”
In an effort to compensate, the revenge trader will almost always chart a course that is propelled by emotions. In an industry where trading plans and preparation are the keys to sustained success, the emotional impulses are always misguided way.

When the revenge trader settles into the losing mentality, every time they lose, they try to fix it immediately, leaning heavily on emotionally driven responses and reactions, less on analytical or methodical thought processes. In this heightened emotional state, the revenge trader loses their sense of professionalism and resorts to trying to compensate for their losses through the use of poorly thought out force.

Revenge trading starts or is triggered by an initial relatively large loss. After that loss, the trader starts to overcome the big loss with larger trades or multiple poor trades, which only makes things worse. What could have been an isolated loss, ends up becoming a catastrophic drawdown or margin call.

The most important thing for traders to know regarding this syndrome (revenge trading), is that it’s very common. As mentioned above, it’s an emotional state that just about any trader might fall into without the proper warning and avoidance systems in place. Once aware of these pitfalls, the next thing a trader has to do is know how to avoid them.

If for some reason, a trader knew about revenge trading but couldn’t avoid falling into its grasp, they need to cut their feelings and recognize their unhealthy footing in their portfolio immediately.

Let’s say, for example, you’re suffering a sequence of losses and you’re going away from making your daily goal and you’re really stressed. Take a step back and ask yourself “am I getting into an emotional state where it’s of the utmost importance that I make up all of my losses as quickly as possible?” if the answer is yes, you might be infected with the revenge trader syndrome. Our professional advice is to stop everything and make it quick.

If you’re in it, you’re probably the type of trader who would fail to admit that you’re capable of taking losses. You might fail to understand that the market doesn’t care about what you’re doing. Trying to succeed in the market might have become a stronger impulse than following the market prudently and making reasonable decisions based on what you study

Most importantly, your concept of losing trades is equivalent to failure. Know that taking losses according to your plan is not a failure. Persuade yourself that this is the right way and you can’t force yourself. In case you missed it, here is a great guide for how to embrace such a mental state.

Watch our Correct Mindset for Traders

Not all revenge traders are created equally though, as there are several types of trading that can happen while in the revenge state.

If you recognize that you’re a revenge trader, as we’ve mentioned, first know it’s undeniably bad for your portfolio. From there you can try to deal with your mental state. 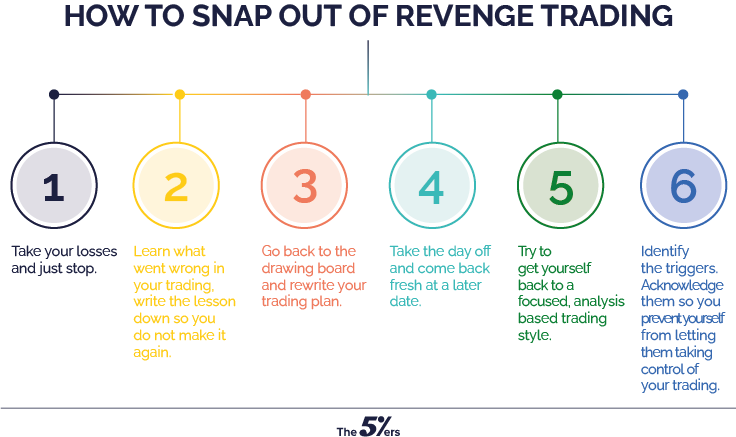 How to avoid revenge trading in the future

As we mentioned, it is imperative to know what would trigger in yourself a revenge trading behavior. Once you have that in place you need to document the reasons why you have lost a certain trade. Remember losing trades are unavoidable and are part of the trading business, so make sure you are taking correct trades and remember some of those will end up losing money.

A small loss is very unlikely to trigger a revenge trading attitude, so make sure you trade small position sizes so you do not get emotionally attached to a certain trade.
Lastly, if you feel like increasing your lot size to overcome a loss, just don’t! Stop yourself and walk away from the computer.

Revenge trading is one of the most common and devastating behaviors traders can experience. It will more likely present itself after a big loss or a losing streak, leading traders to increase position size and the number of trades taken. All traders will most likely experience it at least once, so make sure you identify it once it gets to you. In that way, you will be able to prevent it from damaging your account, and avoid it in your trading performance.

How to Succeed in Day Trading Using The 1% Risk Rule
How To Find Entry Points Using Multiple Time Frame Analysis
The5ers Introduces Indices For Trading!
How to Reduce and Dominate Your Forex Trading Risks
Make Peace With Your Fear of Losing in Trading and Start Managing it
Stop Self Sabotaging and Losing Money in The Market
Follow us: