The Power of Fibonacci Extensions/Retracements in Forex Markets Trading

I knew that a post-BREXIT UK/EU Trade Deal was imminent (though, admittedly, I did get the timing off by a week – I thought they would arrive at the result they ultimately did sooner by about a week). Similarly, I accurately predicted the outcome of the infamous referendum vote in 2016. I also, consequently, accurately predicted the controversial election of Donald J. Trump, the now-outgoing President of the United States. Although, that last one was actually BECAUSE OF the BREXIT referendum vote, and my correct assessment that a sort of perfect storm – one comprised of a deep and widespread disliking of Hillary Clinton (and with her, the “establishment”) coupled with an extreme right-wing element that was seeming to start to grip the body politic not just in the U.S., but globally.

I was working for a Florida-based Forex education firm at the time, where, aside from being an instructor and course author myself, among other things, I also hosted a daily broadcast covering the markets LIVE for hundreds of traders globally. My colleagues and I were seen as crazy by many for suggesting there was even a chance that he would win the 2016 election – never mind our suggestion that it was more than a chance – Donald Trump was likely to be elected 45th President of the United States.

But alas, there I was with my colleague Tad, doing a live on-camera broadcast on the 20th January 2017, announcing to our audience that the U.S. now officially had sworn in their new President, Mr. Trump.

Proving this is not just a one-off, or a fluke, if you like, I also accurately predicted the national lockdowns here in the U.K. – PLURAL – As in, the original one in March 2020, but also, the new one that has only just been announced by British Prime Minister, Boris Johnson. I began writing this article just before his announcement at approximately 8 pm GMT this evening – but I have been anticipating this since last week.

This article is an educational guest post, it was written by Christopher Guzman from founder and CEO of KickStart Trading and author of the Ultimate Forex Trading Course.

I am NOT Nostradamus – that, I can promise you. Nor am I pretending to be. And I am not in any way bragging. Well, not in the way you may be thinking I am – I am bragging about the power of fibs – but that’s it!

What I AM, though, is a Forex Technical Trader. More accurately, I am a Forex Trader with 10 years’ experience in the science of technical analysis – the study of the language of the markets. More specifically, I specialize in Multiple Timeframe Fibonacci Analysis, and my successful geopolitical predictions over the years are directly attributed to my mastery of the Fibonacci retracement/extension relationship, rather than to any sort of “magic” or “trickery”.

Disappointing though that may be, what might be somewhat redeeming is the fact that there is a type of “magic” indeed happening, but it isn’t from any technical “gadgets” or “gizmos.” It isn’t from any sort of hackery or “secret,” but rather, it’s the market itself. See, Fibonaccis are simply a measurement of the market’s waves. To begin to understand fibs, and therefore, to be able to appreciate them, we must understand a few fundamental principles of technical analysis. 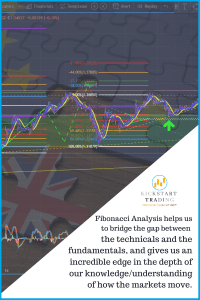 Second, the waves unfold according to a 4-stage wave cycle. Building on that first point, not only do we know that the markets move in waves, we also know the exact cycle of those waves and how to measure them (fibs).

Third, the larger time frames control the smaller time frames. And – bonus – the smaller time frames, when used correctly, can act as “early warning systems.”  This is a simple concept, really, but one which too often trips many new traders up. We are looking at exactly the same information, regardless of the time frame on which we are viewing that information. In other words, just because we’ve switched from the Daily time frame right down to the 15-min time frame, that doesn’t mean we’re in an entirely new universe with different figures (though it may sometimes seem that way at first glance). Rather, we’re actually viewing the exact same information, just presented over a different period of time.

Fourth – fundamentals exist to expedite the technicals. This one is key, as it’s the real secret to my predictions. See, understanding the technicals is one thing, but when you are able to contextualize those technicals in the economics and geopolitics of the day, suddenly you start to sound like the smartest guy in the room.

For example – the post-BREXIT UK/EU trade deal was predictable. Not because I KNEW with 100% certainty, or had some sort of behind-the-scenes knowledge – No, it’s because technically speaking, I am BULLish on GBP/USD all the way to 1.4470, at a minimum, and on the 15-minute time frame, which I use as my “early warning system,” it made perfect sense that the market was pricing in this expectation because the current up-Fibonaccis and sub-fibonaccis were ALL moving cleanly on Cable, and on their C-D legs. Having a no-deal BREXIT does not fit inside of that technical frame, because the economic chaos that would almost certainly ensure would not be a positive thing for Sterling. 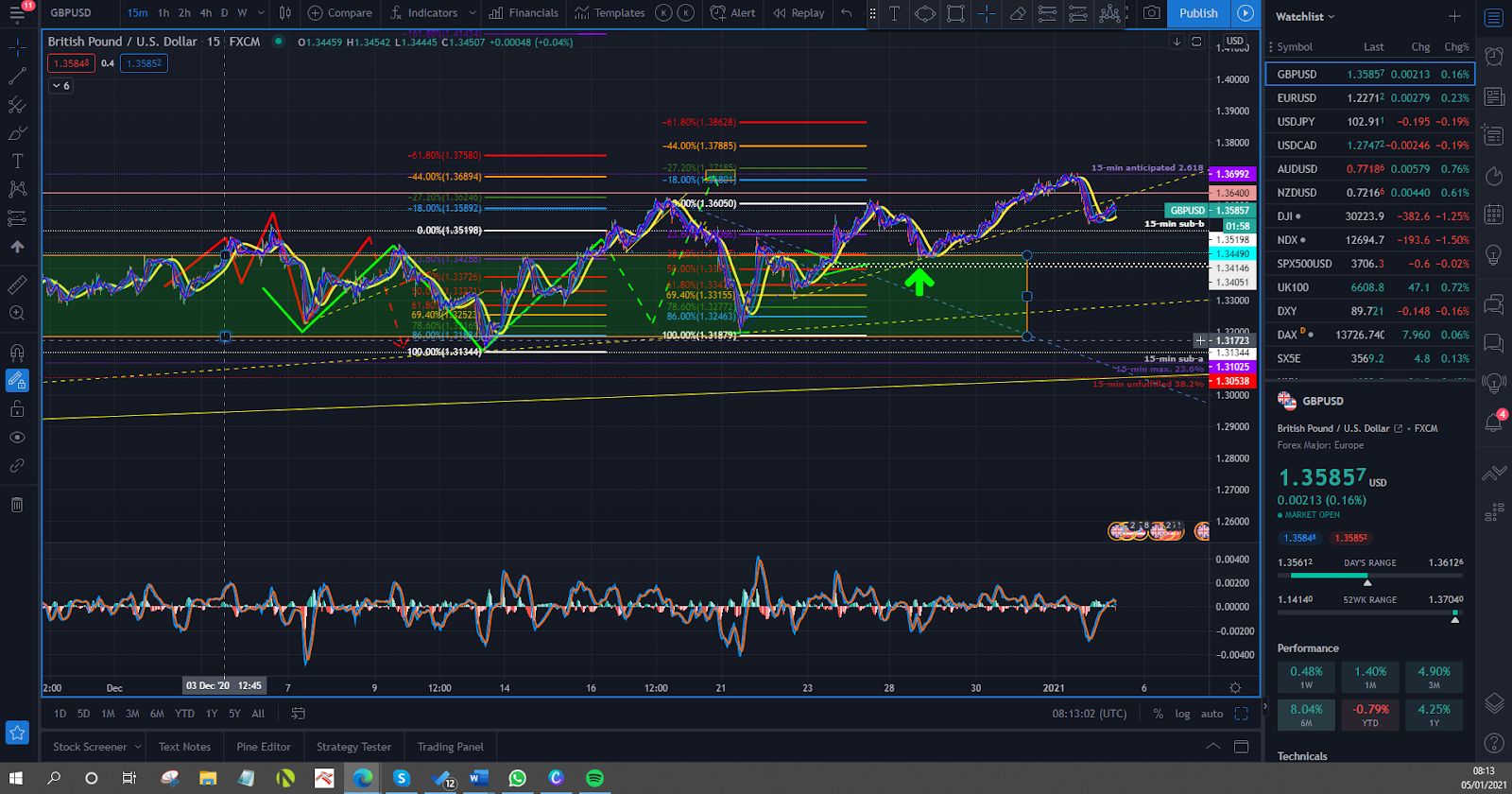 Even in December 2020, when things didn’t seem so certain for a moment there, and Cable produced not one but TWO 15-min sub-crowns, we were still able to clearly see the defined anticipated move to 1.3699 (which has now just recently been achieved).

your analysis must make sense. In other words, if we are looking on a Daily time frame at the GBP/USD, and we have less than a 38.2% max. retracement, and we’re solidly in a long-term downtrend, but the 2.618 extension level, which is what we’d be expecting the market would push toward, is way out there somewhere in the great beyond where the GBP/USD has NEVER, EVER gone before, it’s reasonable to suspect the market would be more likely to push toward the unfulfilled 38.2% to the north (where price has been before) than it is to move toward the 2.618.

When you learn the power of Fibonacci retracement/extensions in the markets, you gain an incredible edge in trading because suddenly, you elevate your understanding from the “what” of the markets, to the “how” and the “why.”

Couple that knowledge with a firm grasp of the geopolitical and macroeconomic forces that move the world, and with it, currencies, and always consider those key principles – 1) the market moves in waves, 2) those waves unfold in a 4-stage cycle, 3) The larger time frames control the smaller time frames, 4) The fundamentals expedite the technicals, and 5) Your analysis must make sense contextually – and you are well on your way to not only becoming a well-rounded, dynamic and versatile trader, you also start to sound like the smartest guy (or gal!) in the room.

For more information on learning to trade the Forex market professionally, visit us at https://kickstarttrading.com/the-ultimate-forex-trading-course