The UK might be a small landmass, but it’s the world’s sixth-largest economy, and spectators have watched the British Cable Pound with interest for a while now. From the country’s adamant refusal to join the Euro Zone to the stark drop in the pound’s value following Brexit, there’s certainly plenty to discuss here!

But what does the GBP/USD forecast look like for the months to come, and should swing traders consider taking advantage of the current situation? I don’t have a crystal ball, but I do have plenty of data and research to inform my thinking.

Keep reading for a brief overview of the British Pound’s characteristics and history, alongside an analysis of recent trends and a prediction for what the future could hold. This is a huge topic, but I’ll do my best to keep it brief!

This article is an educational guest post, it was written by Tim Thomas from Tim Thomas Co, Learn to Swing Trade for Wealth and Financial Freedom

A Close Look at the British Pound

The British Pound is the world’s oldest currency that’s still in use. It’s also one of the strongest currencies, ranking above both the Euro and the US Dollar. Anyone who’s visited the country on vacation will confirm that the exchange rate can be hard-hitting (unless they happen to come from Kuwait, Jordan, Bahrain, or Oman).

Unsurprisingly, this makes it a popular currency among traders — it’s the fourth most traded currency in the world, making up around 6.4% of trades in total. If you’ve kept up with the news over the last few years, you’ll also know that it’s extremely volatile.

The past five years have seen the Brexit referendum result, two national elections, and now the COVID-19 market crash — the future of the country is increasingly uncertain, with the outcome of Brexit and the post-pandemic future still in the balance. All these factors affect the pound’s value relative to other currencies.

Throughout this article, I’ll be focusing specifically on the British Cable Pound, a colloquial term for the GBP/USD currency pair. When discussing a currency, you have to use another currency as a basis for comparison, and what could be a better choice than the most traded and arguably most important currency in the world, the USD?

To begin with, Brexit was a big topic. After the public voted to leave the EU, the value of GBP with respect to EUR plummeted. It hasn’t recovered since — GBP/EUR was about 1.4 in late 2015, but the two currencies are now close to parity. 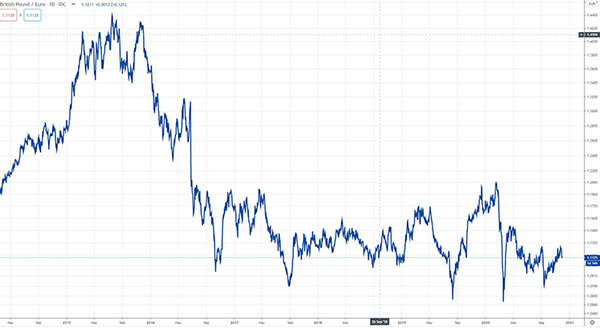 A similar trend has taken place with the USD/GBP rate, although the drop has been less marked (from around GBP/EUR 1.5 in 2015 to around 1.3 now).

As mentioned already, the country has been suffering from political volatility since the Brexit outcome. Former Prime Minister David Cameron stood down in 2016, and his successor Theresa May then resigned in 2019 after losing confidence among her party and the public with respect to Brexit. 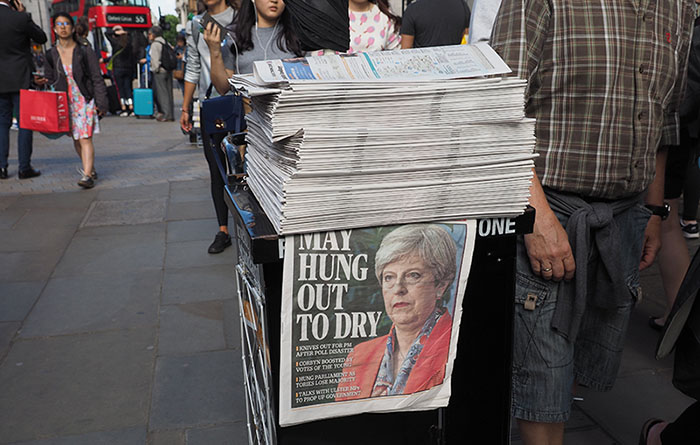 Over the last five years, there have been three Prime Ministers, two national elections, and two leadership competitions within the ruling party.

The unstable fate of the country finally seemed to change at the end of 2019, when May’s successor Boris Johnson achieved a decisive win in national elections by taking a firmer stance on Brexit. The pound surged against the dollar, and Forex traders were hopeful for a brighter future. But it proved to be false hope. Relations between the EU and the UK have gone from bad to worse, with the two sides failing to reach a mutually satisfactory agreement. Throughout this time, the GBP/USD trends have been predictably volatile. Even before any talk of a pandemic, the situation wasn’t exactly looking rosy. Now, things have gone from bad to worse.

How the COVID-19 Pandemic Affected the British Pound

As with most other countries, the pandemic spelled bad news for the British economy.

The FTSE 100 Index (the nation’s major stock exchange) and the country’s GDP both took a huge hit in April, and they haven’t recovered since. As a result, the sterling fell sharply against the dollar in this period — in mid-March, the GBP/USD rate went from around 1.3 to around 1.15 in a matter of days. Although the US was also experiencing similar economic difficulties due to Coronavirus, only the UK had the double whammy of Brexit and the pandemic to contend with.

Since then, the British Pound has gradually recovered from its low point against the US Dollar in mid-March, climbing closer to the 1.3 level in October. But this could be about to change. The UK now faces a severe second wave of the virus and further lockdown measures, which is likely to spell bad news for the Pound’s value.

GBP Rates: Impact on Businesses and the Economy as a Whole

When the UK economy is at risk of becoming inflationary, the central bank raises interest rates to make the UK’s returns seem more attractive to foreign investors. This encourages pension funds to sell USD and to buy GBP, making the GBP relatively more valuable.

Instead, the UK’s Central Bank has recently pushed interest rates even lower than they were already to counteract the effect of the economic contraction. This makes the UK less desirable to foreign investors. Nonetheless, the UK economy has shown some hope of recovering from the COVID-19 crash. The British government has stepped in to provide support for businesses that can no longer operate and employees who can’t work, easing some panic and delaying unemployment. But there are doubts over whether this is sustainable. As government measures and support fade away, redundancies and economic troubles are inevitable, especially as the country heads for a second lockdown. The UK seems to be in an increasingly perilous position.

What does this mean for the British Pound?

The IMF predicts a 6.5% fall in the value of the GBP, and this could go even lower. However, other analysts suspect that the USD is overvalued and that this will ease some of the tensions. This could also depend on the outcome of the upcoming US elections.

What Does the Future Hold for the British Cable Pound (GBP)?

It would be a stretch of the imagination to come up with an optimistic, upbeat prediction for the future of the British Cable Pound. Unless the fortunes of the UK and its currency drastically change, it seems to be heading for greater volatility or a weaker currency — and probably both.

When the government’s fiscal stimulus measures come crashing down and the country finally crashes out of the EU — possibly without a proper agreement in place — the GBP is likely to decrease relative to the USD.

Having said that, the USD also remains volatile at the moment due to Trump’s handling of the pandemic. The GBP/USD currency pair will likely remain volatile for a while. Meanwhile, the GBP/EUR currency pair is unlikely to recover to its pre-Brexit heights. However, volatility could be good news for swing traders who are capable of predicting upcoming movements and cashing in on them.

My name is Tim Thomas, Born in Guildford and now living near Southampton, UK with my family. I started my career in the financial markets and have traded and invested in stocks, options, FOREX, futures, crypto, and real estate. My website is dedicated to helping you learn and master swing trading to reach your wealth and financial freedom goals.

The Curse of Revenge Trading and How to Avoid it in the Future
Navigating the Volatility of the Forex Market
Can ChatGPT really help you make money in the forex market?
5 Steps To Building Unwavering Trader Confidence
Learn Why Traders Can See the Same Chart Differently
Finding the Confidence in your Trading Strategy
Follow us: