Financial markets are known for their volatility, a nonlinear structure that rigorous mathematical models cannot describe. But still, quite often, technical analysis patterns work on the market. One such technical pattern is the “forex triangle pattern”.

The Triangle pattern is proven by many years of practice by hundreds of traders in the market’s technical analysis. This is what gives the trader potentially profitable ideas for analyzing the market and opening positions.

What is a Triangle Chart Pattern?

This is one of the most famous patterns in the forex market. It is a narrowing range in which fluctuations occur from one trendline to another. These triangle boundaries can be drawn along two extremes respectively. As soon as there are two endpoints of a movement, draw a line through them and get a border, from which the price will most likely bounce back in the future.

Regardless of the trend, such a barrier exists both above and below. Often, the Forex triangle is formed for a very long time. Still, the timely identification of narrowing signs will allow you to understand in advance, the further course of events and, with proper skill, even trade within it until the price leaves its borders.

Why Triangle Patterns Work in Forex?

As you already know the market does not rise or fall freely because different traders enter at random times with diverse strategies. Some book profit after the initial trend while some add more exposure to their positions. Such dynamic behavior causes the market to fluctuate resulting in a retracement. Forex triangle patterns are the result of such retracements in a trend that inform traders that the trend will continue in its direction.

Symmetrical triangle is an isosceles pattern that can break both up and down at the convergence point. It is usually formed at the end of a flat period when the market starts a new long-term trend. It is important to correctly identify this pattern of technical analysis. In these conditions, it is easy to confuse it with the flag pattern.

What is a symmetrical triangle?

A symmetrical triangle indicates a continuation of the early movement rather than a reversal. The figure is formed by two converging lines, the upper one (1-3) is drawn through two highs; the lower one (2-4) through two lows. Only after these four points (1,2,3,4) have been established, the symmetrical forex triangle patterns can then be formed. The volume within the pattern is usually reduced. 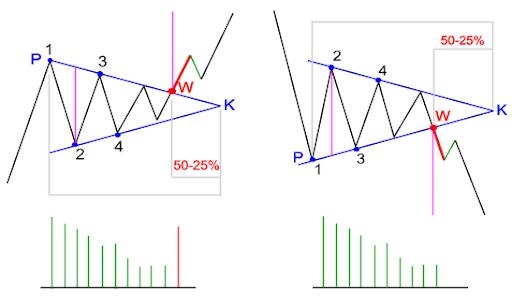 Quite often, in forex triangle patterns, you can see exactly six pivot points before the trendline is broken.

A buy signal is generated after the breakout of the upper border, and the volume should increase significantly. After a breakout, corrective movements are not uncommon (marked in green).

A sell signal is generated by a breakout of the lower border. The movement after the breakdown of the symmetrical triangle should be in the range from 50% to 25% of its border, counting from the beginning of the pattern (point P). Another movement can be called a false breakout. Very often, the level marked by the apex of the triangle (K) is strong support or resistance.

How can we trade symmetrical triangles?

Suppose a stable uptrend has formed on the market before the symmetric triangle appears. In that case, there is a high probability of breaking the upper border of the pattern and continuing the rise of the price of that financial instrument. If the downtrend has settled on the market, we expect its continuation and breakdown of the lower border of the pattern. How do we trade a triangle in this case? Just place a pending Buy stop or Sell stop order above (below) the border and wait until it is triggered. 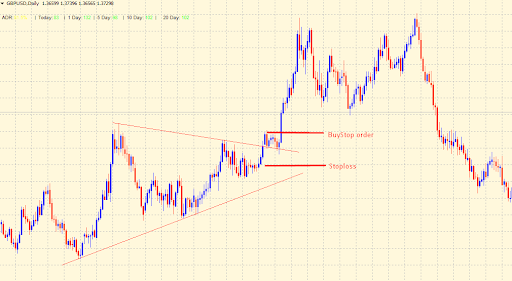 The Ascending Triangle is also called Forex Bullish Triangle. Its appearance means that there is already a bullish trend on the market, on which sellers managed to form a local resistance level, and for some time, buyers have been unable to overcome it. After the breakout, the overall bullish trend should continue.

What is an ascending triangle?

The upper trendline is an approximately horizontal line (resistance), the lower border (support) has an upward slope. As you approach the calculated intersection point, the amplitude of the oscillations inside the figure decreases. In most cases, an Ascending Triangle is worked out as a bullish trend continuation pattern. Still, the signal strength depends on entering the pattern and the direction of the breakout.

How to trade ascending triangles?

When the market enters the pattern from bottom to top (bullish trend) and breaks through the horizontal border upwards, the signal is considered the strongest. If the price enters the pattern from top to bottom (bearish trend) but further breaks the upper border, the bullish signal is deemed to be weak. If the Ascending Forex triangle pattern is formed on a downtrend, then after the price entry from top to bottom and the breakdown of the inclined border (downward), most likely it will be a bearish breakdown. 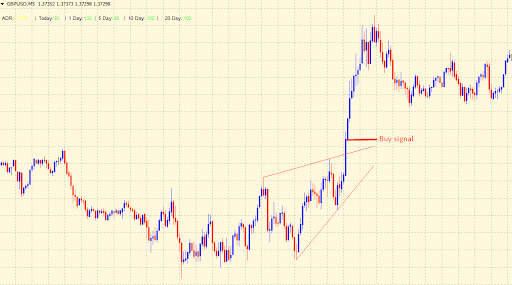 Descending triangle is more often a trend continuation pattern, but it can also indicate a reversal. This means that the vital element that will determine the trend is the direction of the triangle breakout.

What is a descending triangle?

The appearance of a descending triangle in a downtrend usually indicates that the price is likely to continue moving down. However, to be sure, wait for the breakout.

For a descending triangle that appears in an uptrend, the situation is the opposite; focusing on a possible breakout of the upper border of the triangle, wait for it to happen.

The appearance of descending triangles is typical for strong trends, like during a bear or bull market. These are generally considered to be medium-term patterns, although they can also appear on long-term charts, altering the underlying trend’s nature.

Often, before the actual breakout, a false breakout in the opposite direction can be seen.

How to trade descending triangles?

When the market enters the descending Forex triangle pattern from top to bottom (bearish trend) and the horizontal line breaks downwards, the bearish signal is considered the strongest one. If the price enters the pattern from bottom to top (bearish trend) but further breaks the lower border downwards, the bearish signal is considered weak. If the descending triangle has formed on the general bullish trend, then after the price enters from the bottom up and the inclined border’s upward breakdown, the most probable is the bullish breakdown. 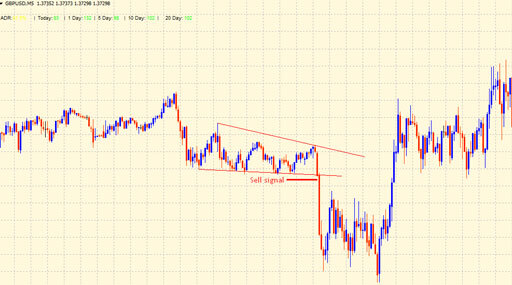 No matter how successful is the system or strategy, you cannot leave your trading account at the mercy of your analysis. Taking care of risk through appropriate position sizing is mandatory for trading.

You should not risk more than 1% of your capital in a single trade. If you find a potential trade on any triangle pattern, try to maximize your profit by analyzing the risk to reward ratio. The reward should ideally be twice the risk.

Triangle patterns are usually considered as continuation patterns. Such patterns are thought of as high probability trade setups. There are three types of triangles called symmetric, ascending and descending triangles. Each triangle pattern has a different interpretation and way to trade. However, the common way is to look for a breakout. You should be careful with the slopes and angles of the triangles as they paly vital role in determining the strength of trade idea. Moreover, you can use RSI or MACD to confirm your trade idea.

We use cookies to ensure that we give you the best experience on our website. If you continue to use this site we will assume that you are happy with it.Ok