In this post, we will discuss five powerful and reliable reversal patterns in the forex market. Generally, reversal patterns provide a great Risk-Reward ratio potential. We will learn how to identify each one of them and how to trade by using these patterns.

What are Reversal Patterns?

A reversal pattern indicates a change in direction from a rising market to a falling market and vice versa. We can use this pattern to predict the upcoming movement and open or close our trades accordingly.

The Head &Shoulders pattern is a very unique reversal pattern. It’s a chart formation created by three peaks of the price. The two peaks on the sides are usually of the same height or close, and the one in the middle is the highest.

The Head & Shoulders pattern is considered one of the most powerful reversal patterns in the forex market. This pattern got the name because it actually reminds us of a head with two shoulders on the sides. Usually, we will look for this pattern and use it after a significant uptrend or an opposite Head & Shoulders after a downtrend. 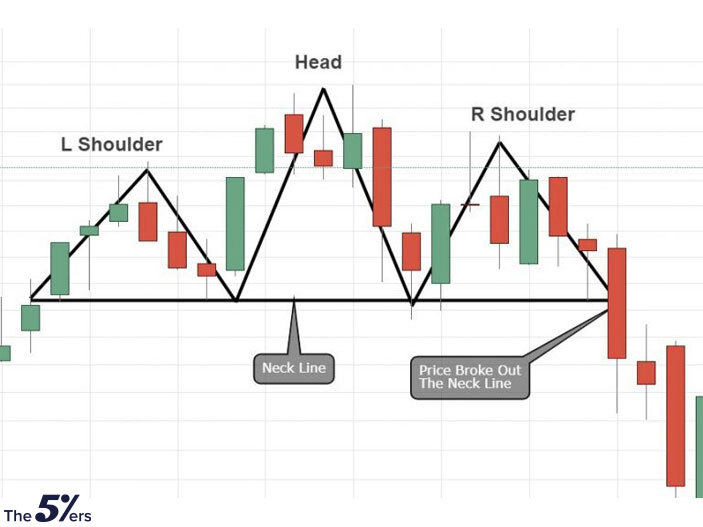 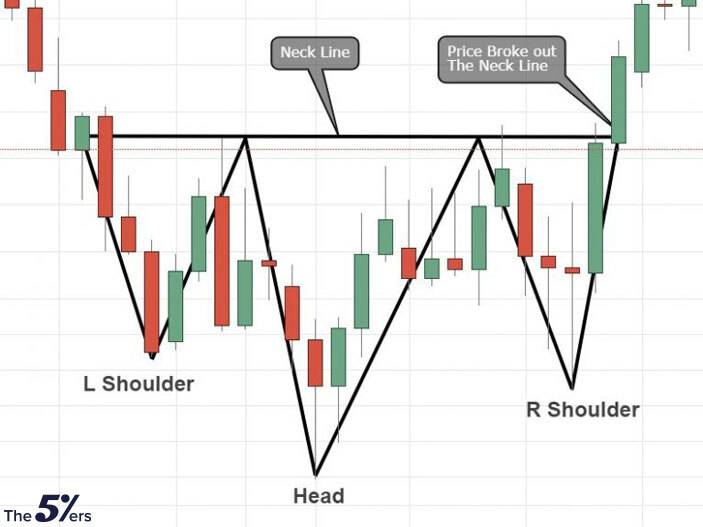 The double top and double bottom are both reversal patterns.

The double-top pattern will usually occur and be useful after a significant uptrend. In an uptrend, the price always creates higher peaks and higher lows.

The double bottom is the exact opposite of the double top pattern. It will usually be reliable and useful after a significant price downtrend.

In a downtrend, the price creates lower bottoms and lower heights.

The price creates two bottoms at the same level in the double bottom pattern, and the sellers failed to create a new lower bottom. That indicates the sellers are running out of power, and a reversal opportunity might appear very soon.

The pattern will be completed when the price breaks out of the trigger line, which is the last top between the two bottoms.

When that happens, we should look for a buy position. 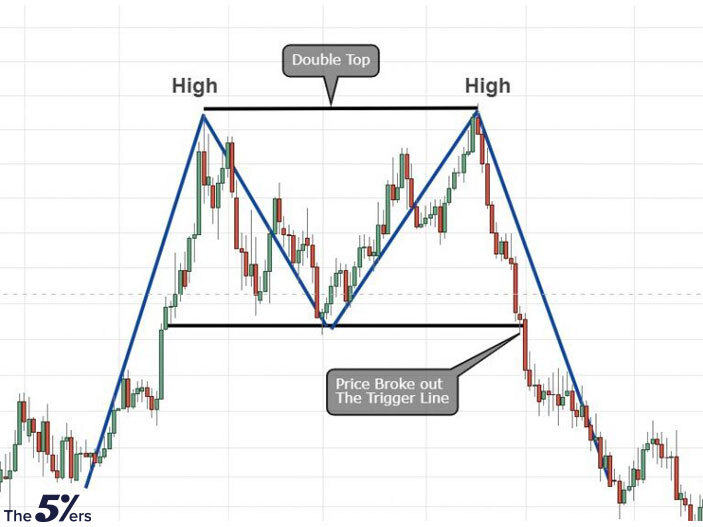 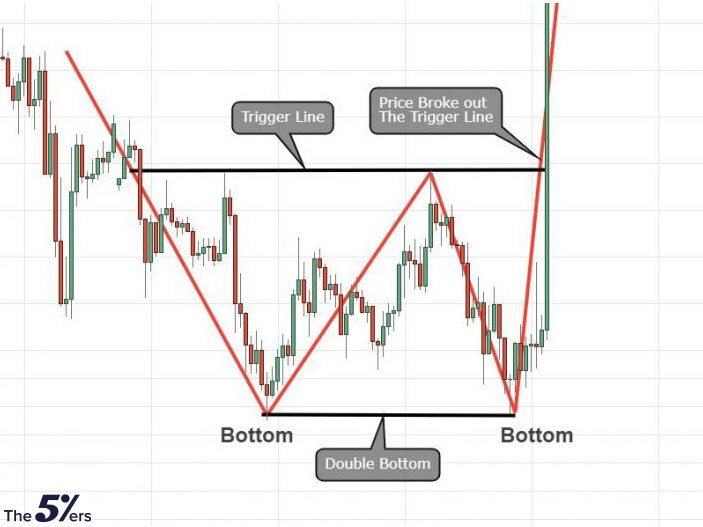 Quasimodo is definitely one of the most reliable and powerful chart patterns to identify reversal opportunities.

Relatively, the Quasimodo pattern is a new one among technical analysis forex traders. Same as the previous patterns we mentioned, Quasimodo is more reliable and powerful if it occurs after a significant uptrend or downtrend.

The structure of the Quasimodo pattern is quite simple-

Uptrend – the price creates higher peaks and higher lows. Then, the price dropped down from the last peak to form a new lower low. A new lower low indicates the momentum has changed from bullish to bearish.

Usually, the entry level will be the last peak of the price.

Downtrend – The price creates lower lows and lower peaks. Then, from the last bottom, the price rallies and creates a new higher high. After a few lower highs, this new higher high indicates the momentum changed from bearish to bullish.

The entry level, in that case, will be the last bottom where the price rallies from.

The Quasimodo pattern is a great pattern to trade since it creates a great Risk-Reward potential. 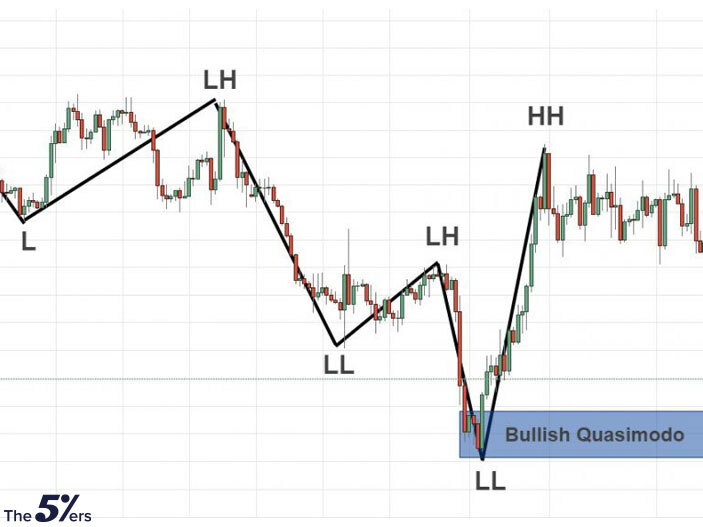 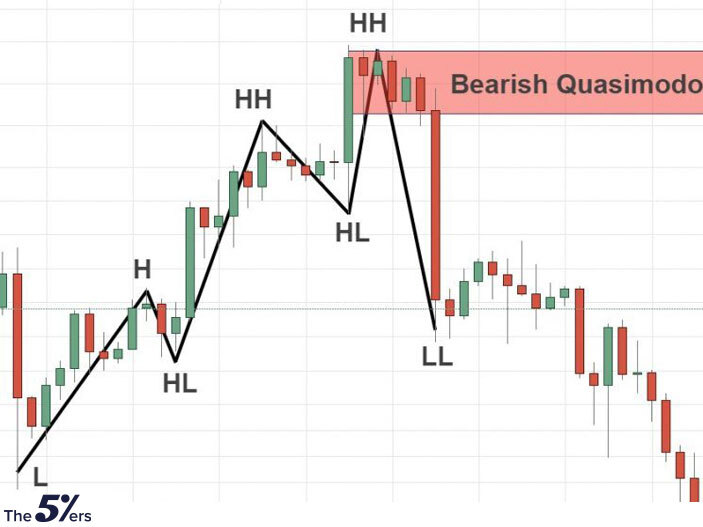 Learn more about the Quasimodo pattern-

The engulfing candlestick pattern is a reversal pattern that is formed by two candles.

Bullish reversal patterns show up after a downtrend – It starts with one bearish candle followed by a large bullish candle that is engulfing the bearish candle. The bullish engulfing candle must close above the previous candle’s high. That indicates the buyers are waking up, and we should look for a price action setup for the buy position.

When this formation occurs, we should start to look for a price action setup for the sell position.

Finding a bearish or bullish engulfing candlestick pattern at support/resistance levels makes it much more powerful and reliable. 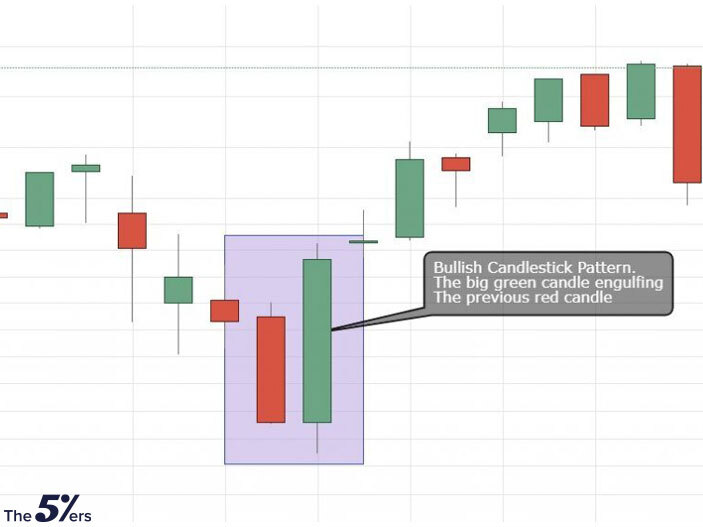 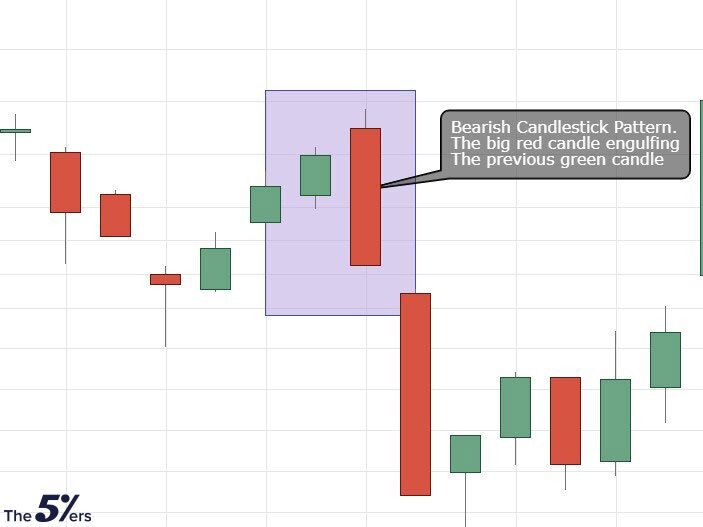 The structure of a bullish pin bar starts with a long tail at the bottom, which is called a “wick.” The tail should be at least 2/3 of the entire candle size, which means a long lower shadow.

Then, a small body which is the area between the open and closed price, and in some of them also a small tail at the top.

When we get this type of formation after a significant downtrend, it indicates of a reversal opportunity is coming up soon. In that case, we should start to look for a price action setup for the buy position.

The structure of a bearish Pin Bar is the exact opposite, and it starts with a long tail at the top, then a small body, and a small tail at the bottom for some of them.

When a bearish Pin Bar candlestick pattern occurs after a significant uptrend, we should start looking for a price action setup for the sell position. 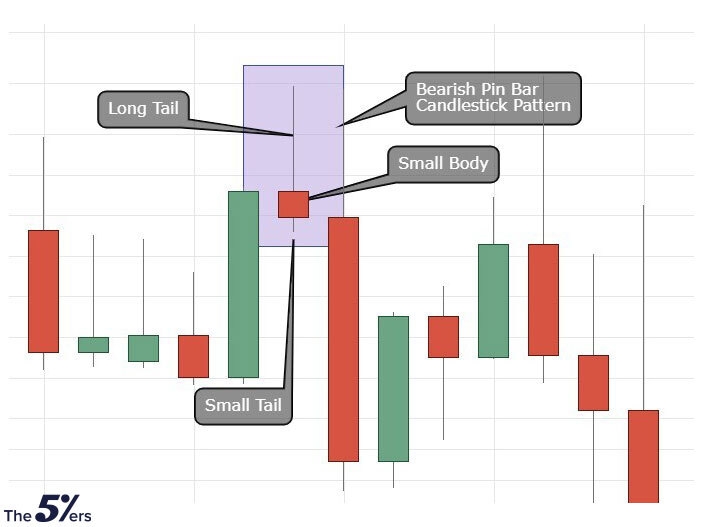 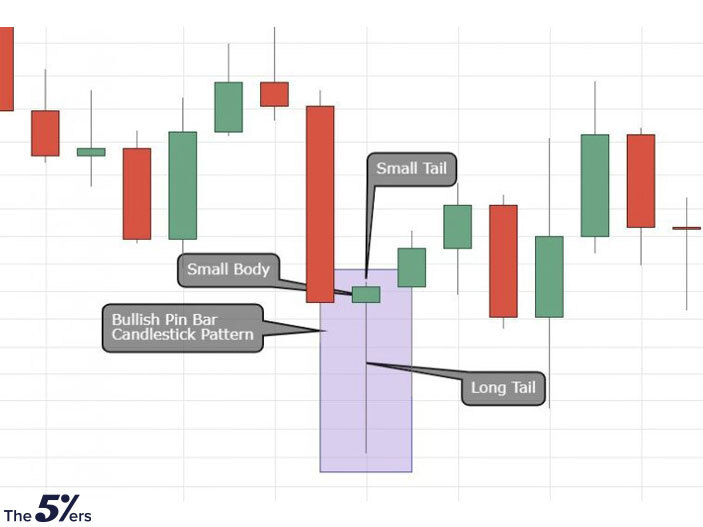 Reversal opportunities are rarer than momentum trading or continuation trading. Still, on the other hand, reversal patterns are usually more reliable, and the Risk-Reward potential is higher because any reversal opportunity can sometimes be a beginning of a new trend, and what’s better than being in a trend from the very beginning?
In this post, I described the 5 most powerful reversal patterns that I believe can help any trader to get a better Risk reward ratio for the long term.

The Curse of Revenge Trading and How to Avoid it in the Future
Navigating the Volatility of the Forex Market
Can ChatGPT really help you make money in the forex market?
5 Steps To Building Unwavering Trader Confidence
Learn Why Traders Can See the Same Chart Differently
How to Spot Trend Exhaustion Without Using an Indicator
Follow us: