The Effects of Trade Deficit on the Currency Market

You may have heard economists saying, “We need to get our trade deficit back on track.” They are not wrong, the effects of trade deficit can reach a nation’s overall economy and its currency.

So, let’s find out what is a trade deficit is and how it can impact the currency market.

What Exactly is a Trade Deficit?

In a trade deficit, the country buys more goods and services abroad (imports) than exports to other countries. Having no resources to manufacture the products a country requires can create a trade deficit.

Oil and gas are common examples of natural resources that countries lack and must import. Developing nations might also lack the skilled workforce to manufacture their goods, and as a result, depend on more developed nations.

It is also possible that a trade deficit is due, in part, to foreign goods being more affordable than domestic goods.

A country’s imports are supposed to be equal to its exports. If they are equal, then the trading account of a country will be equal to zero.

Why is there a need to have a trade account of zero?

You can understand this by looking at why the imports and exports increase or decrease.

Exports and their Impacts

Foreign companies that buy U.S. exports exchange their local currency for dollars to facilitate the purchase, which increases demand for Dollars.

As the demand for U.S. goods falls, the exports will decrease hence impacting the USD. As a result, dollar exchange rates can be weaker than other currencies due to decreased demand for dollar-denominated goods.

When a country buys something from another country, it pays in its currency. After that, the currency is either kept as a reserve currency or swapped for local domestic currency.

It signals to the markets that demand is falling, causing the country’s currency with the trade imbalance to drop. This raises the cost of imports while lowering the cost of exports.

Foreign countries’ currencies are stronger than their own, allowing them to buy more goods. As a result, demand for the country’s exporters may increase.

Imports and its Impacts

Imports and goods bought from other countries. Their amount is determined on the exchange rate if the currency is of value or not.

For example, if the goods are bought in U.S. dollars, the foreign company will exchange in USD.

So if imports increase and the amount of money spent to buy goods from other markets increases, it would impact the currency’s value.

The impact on the currency market

Through its impact on the supply and demand of foreign exchange, the balance of trade affects currency exchange rates.

A country’s relative values are affected by currency demand, which is influenced by trade. When a country exports more than it imports, its goods are in high demand, which leads to high currency value.

If demand is high, supply must be increased, and prices will rise, causing the currency to appreciate. Conversely, a country’s currency should fall in value if it imports more than exports because there is less demand for its currency.

The value of currency depreciates over time if the proportion of imports are more than exports.

We would expect a country with a trade imbalance to see its currency decline under normal market conditions. As a result, its exports are cheaper, and its imports are more costly.

When a country’s trade imbalance persists, it indicates that domestic cash is moving there. So, for example, Chinese exporters are compensated in U.S. dollars. But, on the other hand, the Chinese exporters have the option of exchanging the money or keeping it in reserve.

The primary problem with this is that other countries may collect a large sum of money. As a result, this may be utilized to acquire and control significant portions of the economy.

A robust economy typically accompanies a strong currency. As a result, we frequently witness large inflows of foreign money into so-called “safe havens.”

As a result, when a country has economic or political challenges, it may see a capital flight to safer markets.

For example, during the Asian financial crisis of 1997, huge amounts of money were invested in the United States to secure investors’ money.

When a country’s currency is strong, it may buy more items from other countries at a lower price. But, at the same time, the cost of its exports rises. As a result, there is a counter-reaction, resulting in a trade deficit.

Example for a trade deficit

To understand the whole concept of trade deficit, let’s explain this with an example.

An example of currency depreciation can be explained in such a manner that if the U.S. exports chocolates to Japan, a 1 USD chocolate bar equals 1.5 JPY. Japan has to buy 1 USD for 1.5 JPY, so it must spend more than the U.S.

Hence the demand for dollar goods increases, and the price of JPY soon depreciates.

Now let’s apply an example to the forex market.

The trade deficit of the U.S. reached an all-time high of $73.3 billion in August. However, the market tells you a different story when comparing USD to other major currencies like GBP, EUR, or JPY.

In the majority of 2021, the USD will revive its safe-haven characteristics. Due to the Federal Reserve’s push to the economy, the USD is on the rise. You can see on the chart below how GBPUSD is on a decline. 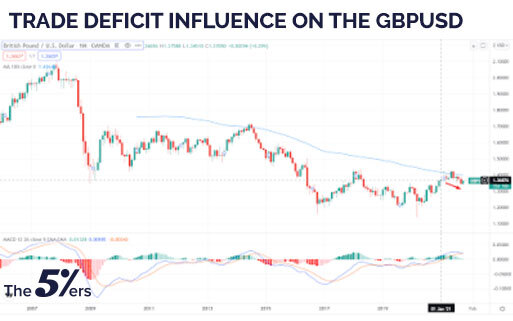 Final thoughts on the Effects of Trade Deficit

Effects of the trade deficit on currency exchange rates happen since demand and supply can influence currency appreciation or depreciation. Therefore, as a trader, you should keep an eye on the country’s trade deficit.

A country with a large trade deficit may have a weak currency. However, this isn’t always the case.

Make Peace With Your Fear of Losing in Trading and Start Managing it
Stop Self Sabotaging and Losing Money in The Market
What is an Automated Forex Trading System and How Does it Work
Understanding The Overall Concept of The Freestyle Factors
Get Comfortable With Your Trading Routine to Maximize Your Trading Results
What Value Do Fibonacci Numbers Have as a Research Tool?
Follow us: