Trading CPI in Forex – How Does CPI Affect the Forex Market

As a trader, you have plenty of trading tools at your disposal. From technical indicators to economic yardsticks, you got it all. One such tool is the forex CPI.

In this guide, we are going to hone in on what is CPI and how it affects the forex market.

The Consumer Price Index, also known as CPI, is a key economic statistic that major economies regularly provide. It is a timely snapshot of current growth and inflation levels.

The CPI is significant because it assists central banks in maintaining price stability by keeping a consistent inflation rate across time.

The CPI data is generated by calculating the average price of a basket of goods and services, such as food, transportation costs, and healthcare, and assessing their price change over time.

The calculation of the CPI differs from that of the Core CPI in that the latter removes the Food and Fuel sections.

The argument is that the pricing of these types of goods is quite volatile. Therefore, removing these two groups may aid in better indexing the CPI trends.

The case of US Consumer Price Index

For example, in the US, the Bureau of Labor and Statistics checks the rate of inflation by measuring average change over time against the baskets of goods and services.

The rate of CPI can vary depending on economic situations; however, according to government data, the average long-term inflation in the US is around 3%. Therefore, one of the most important economic indicators is this number.

The Federal Reserve, like many other central banks, has set a medium-term inflation objective of 2%.

The obvious issue is, why exactly 2% and not some other number? Higher inflation can cause the currency’s purchasing power to depreciate quickly, wiping out the actual worth of savings.

Even a 2% yearly inflation rate estimates that prices will double every 36 years; a 4% annual inflation rate assumes that this process will take only 18 years.

As a result, if the Federal Reserve begins to tolerate such high price increases, economic prosperity and the USD’s reserve currency status will be jeopardized.

When is CPI released?

The CPI is published monthly by the US Bureau of Labor Statistics and has been reported since 1913.

However, data is released on a quarterly basis in nations such as Australia, and an annual report is issued in Germany.

The Relationship Between Forex and CPI

As the CPI is a wide indicator of inflation, changes in the CPI may have an impact on central bank monetary policy. Higher inflation in the form of a higher CPI naturally reduces the value of an individual unit of currency since more units of that currency are required to purchase a given item.

However, it may prompt a central bank to raise interest rates in an attempt to contain the inflationary tendency. When a country’s interest rates rise, its currency is more likely to gain as demand for it rises.

On the other hand, lower inflation may result in lower interest rates and less demand for a country’s currency, prompting people to spend, putting more money into circulation, and stimulating a slower economy.

Given this information, it is not surprising that forex fluctuations can occur in kind when the CPI date is announced.

It can sometimes cause volatile conditions with extreme pip fluctuation, resulting in the possibility for significant rewards as well as equal risks.

Let’s take a look at the chart: 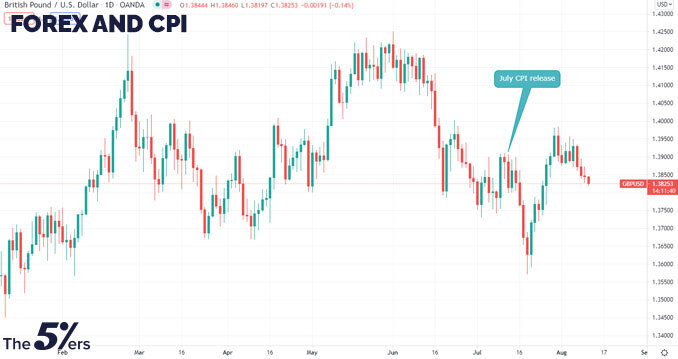 As you can see after the CPI’s July release, GBP/USD went downwards because of US Federal Reserve to maintain interest rates.

Watching the US Dollar Index is one technique to interpret the effects of CPI statistics.

DXY shows the performance of the USD against the basket of currencies.

Because the Index is made up of EUR/USD, USD/JPY, and GBP/USD, we can have a full picture of the event’s outcome by analyzing the US Dollar. 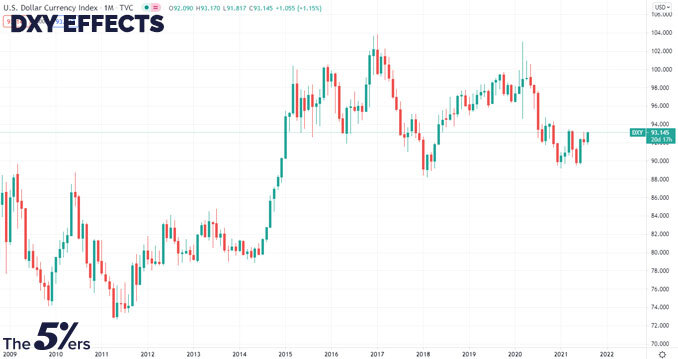 As the above chart illustrates, as inflation rose during the first half of 2018, the US Dollar Index went up accordingly.

However, with US inflation moving lower in the following months and a missed objective of 2%, US interest rate hikes were taken off the table. As a result, the dollar struggled and fell in value against a basket of other currencies.

How Can You Trade The CPI?

Your CPI trading strategy should focus on being aware of the market’s inflation expectations and the possible outcomes for the currency if these expectations are realized or exceeded.

Following the CPI announcement and subsequent analysis, you can incorporate technical analysis into their technique by assessing if the price is reacting to important support and resistance levels defined by indicators such as Fibonacci retracements or moving averages.

These indicators may help you make better-informed trading decisions by providing some insight into the short-term strength of the move.

As you can see after the CPI release, moving averages went downwards, suggesting exiting the long position or entering the short ones. 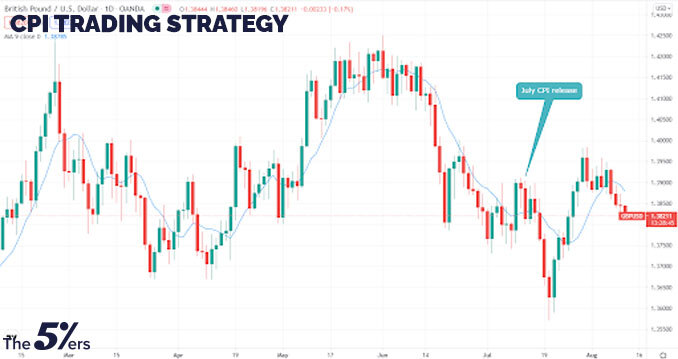 One thing to keep in mind is that, like with all news releases, time is crucial. As a result, opening a trade soon before an announcement may be unwise, as FX spreads may increase significantly before and after the report.

Furthermore, the CPI’s influence extends beyond the monthly release. The CPI number, like other government data figures, is subject to adjustment by economists. Such changes can cause significant volatility in the value of a currency on the worldwide market.

The Consumer Price Index (CPI) is an important indicator of pricing pressures in an economy and a measure of inflation.

Forex traders closely watch the CPI because it can lead to changes in monetary policy by the central bank, which can either strengthen or weaken the currency versus rivals in the market.

Currency strength or weakness can also substantially impact the earnings performance of corporations having a presence in multiple global markets.