How to Avoid Fake Cup and Handle Pattern

Chart patterns capture traders’ emotions of greed and fear as they react to news events and other market developments. These patterns often have predictive value, as people tend to react in the same way to the same stimuli. However, chart patterns aren’t always fail-safe.

In this article, we’ll illustrate how what looked like a promising cup-with-handle pattern in the EUR/CAD currency pair ultimately broke down.

We’ll also explain how you can protect yourself. But first, let’s discuss what you should look for in a cup-with-handle pattern.

As prices fall from their local high, they should form a U-shaped pattern, which resembles a cup drawn from the side. It’s important that the pattern resembles a U rather than a V to give time for speculative hands to sell and new investors to come in.

In his 1988 classic book titled “How to Make Money in Stocks”, William O’Neil suggests the cup depth should settle between 12% and 33% from its high, although some stocks could experience declines between 40% and 50% when markets are volatile. Whilst his advice was written for stock pickers, it holds true across other asset classes.

The EUR/CAD currency pair appeared to form a cup-with-handle pattern starting in March 2020, after rising 12% from a low of 1.4264 to a high of 1.5991 over a 4-week period. The pair’s exchange rate then dropped 6% as it formed a U-shaped base followed by a downward-sloping handle.

However, what looked like a promising chart pattern ultimately failed to deliver, with the EUR/CAD currency pair failing to break out to the upside. Instead, it traded sideways in the following months before breaking down in 2021. 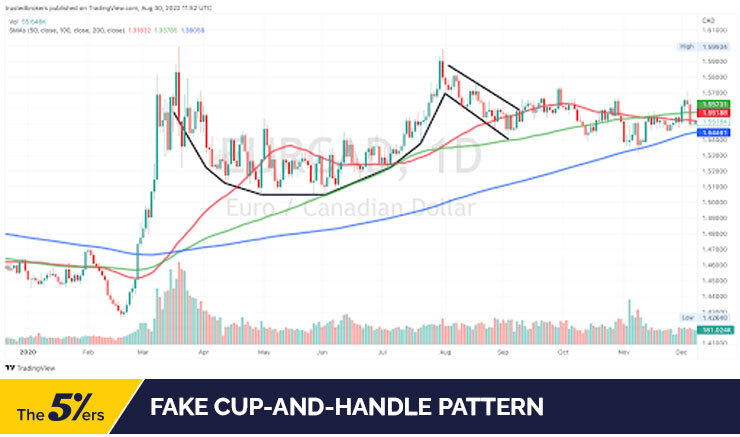 Upon closer inspection, we found 5 signs that should’ve called the validity of this pattern into question. Together, these signs all pointed to a loss of momentum in what was a weak prior advance.

If you’d like to review examples of successful chart patterns, this chart patterns PDF could be of interest. It analyses 20 classical chart patterns and links to interactive charts on TradingView.com to help you place these charts in their context.

How to protect yourself

Most traders prefer to wait for a chart pattern to prove itself before opening a position. In this case, this would’ve meant waiting for a convincing breakout above the 1.5991 high before going long. The breakout validates the pattern and confirms the resumption of the prior uptrend. Importantly, a breakout should also be underpinned by rising volumes.

Some traders take an even more cautious approach and wait until a successful re-test of the breakout before initiating a position. This means waiting for the breakout to lose momentum, falter and resume its uptrend before going long.

You could follow the first approach, the latter, or combine them over two trades. But, no matter what approach you follow, it’s generally advisable to let a chart pattern prove itself.

TrustedBrokers.com is a comparison service for traders interested in Forex, stocks, crypto, and CFD brokers. Easily compare brokers down to the account level to find an account that matches your experience and investment preferences. We’ve reviewed broker spreads, leverage, and platforms to help you make an informed decision.

How to Spot Central Banks Orders and Trade Forex Order Blocks
How to Take Advantage of The Breakout Trading Strategy
The Best Trading Setup Using Mother Bar-Inside Bar Combo
The Difference Between Supply & Demand and Support & Resistance
How to Identify Major Pivot Points in Forex Swing Trading
How to Use Double Top and Double Bottom Patterns to Increase Profitability
Follow us: