The Difference Between Rising Wedge vs Ascending Triangle

The rising wedge and ascending triangle patterns help the price action traders to predict further movement of price of any financial asset.

In this article, we’ll discuss both the patterns, their application in trading, and the difference between the two.

What is a rising wedge?

A rising wedge is a pattern that forms on a fluctuating chart and is caused by a narrowing amplitude. If you draw lines along with the highs and lows, then the two lines will form an imaginary angle that will narrow over time. Moreover, this angle’s inclination must be positive; the resulting corner should be pointing upward, indicating an uptrend.

The rising wedge is not a very common pattern and is not very easy to spot. Even though bulls and bears appear to be in relative equilibrium, the narrowing of the rising wedge corridor suggests that supply is winning. In the end, buyers break down, and sellers take control of the market. To determine how the price will behave further, it is necessary to further analyze this instrument. 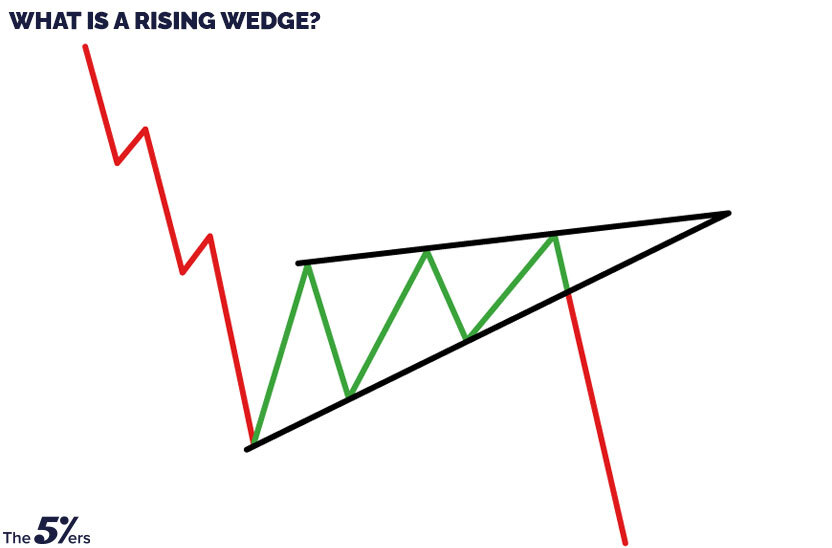 What is ascending triangle?

Typically, an ascending triangle is formed on an uptrend, thereby continuing the direction of price movement. Therefore, do not be surprised if you come across an ascending triangle description as a trend continuation pattern. But sometimes, it happens that a pattern appears after a downtrend, thereby reversing the price. Therefore, it is better not to classify the figure as relative (continuation, reversal) but to classify it as absolute (i.e., rise, fall). 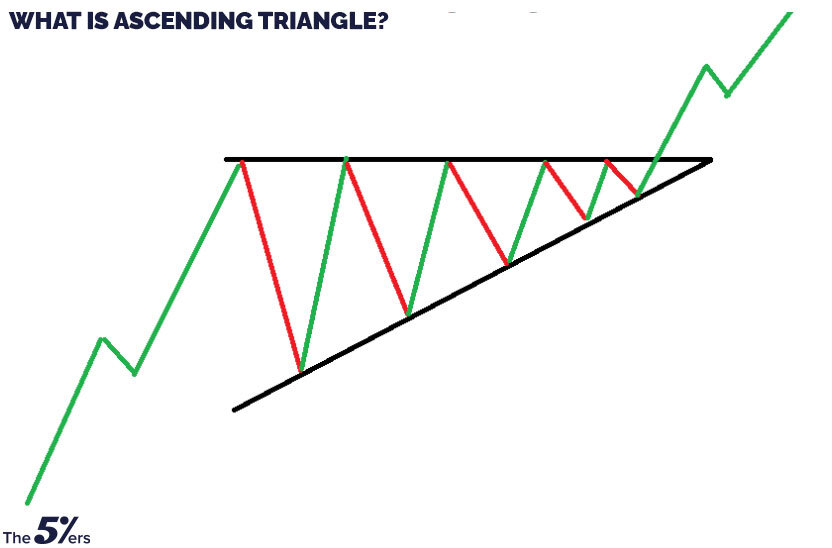 The difference of rising wedge vs ascending triangle

The ascending triangle and rising wedge patterns are quite similar and provide clear entry and exit points to the traders. Novice traders may confuse between both patterns because they have similar directions and shapes. The major difference between both patterns lies in the resistance line, which is horizontal in ascending triangle. It has no slope, and the support line inclines towards the convergence. To avoid confusion, you may need to watch the behavior of price once the pattern is completed.

Although both patterns serve the same function but mostly ascending triangle is considered more of a trend continuation, the rising wedge is thought of as a reversal pattern. If you want to further enhance your understanding, you should focus on the volume, which is higher for downswings on the rising wedge, while ascending triangle has high volume on the upswing move.

How to trade a rising wedge?

As with triangle trading, we have two options: pullback or breakout. The standard way to open a position is to enter the market when the price breaks the resistance line towards continuing the primary trend. Typically, the resistance is the trend line, which has a greater slope. Stop-loss is set either below the level or just below the low of the breakout candle. 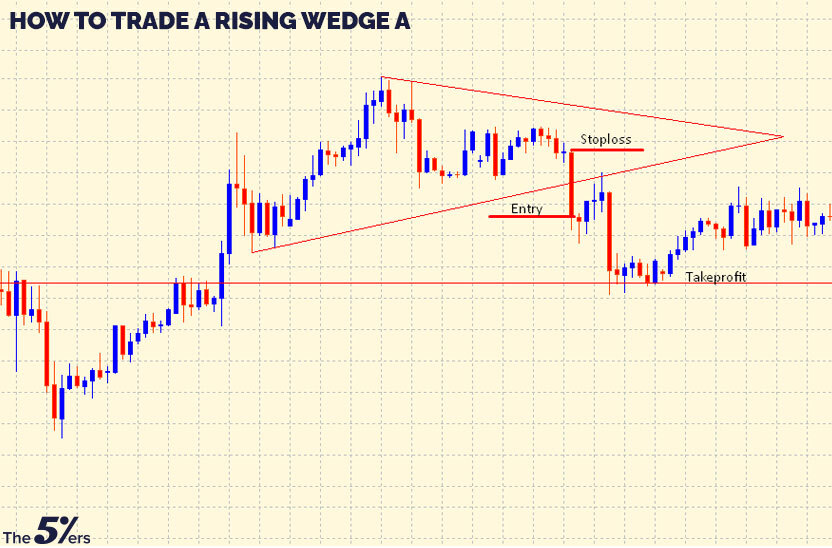 Conservative way of opening a position – we expect the first pullback after a breakout. This is a less risky option because you already know that the wedge pattern has finally formed, and the instrument has started to trend again. But, sometimes, the price moves so vigorously that it does not pullbackback. In this case, you can stay out of the market. We set the stop loss either below the level or slightly below the minimum of the reversal candlestick. 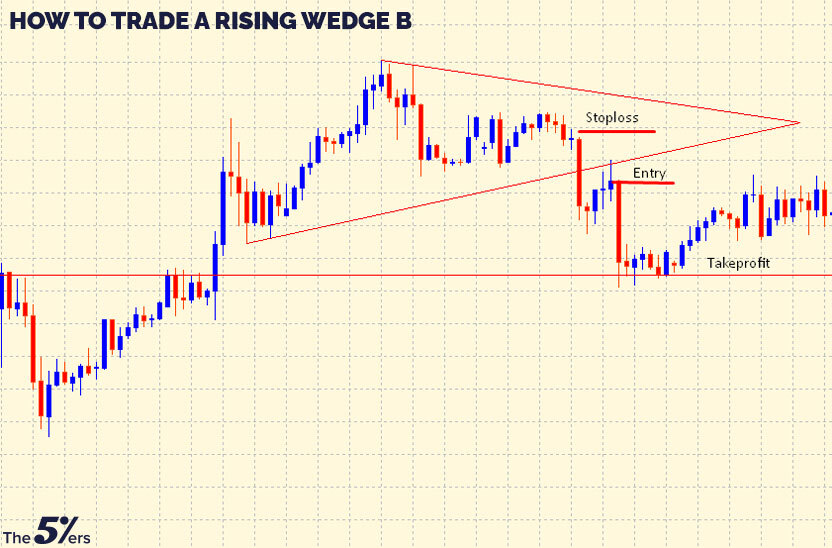 The pros and cons of the rising wedge

How to trade ascending triangle?

As with most technical analysis patterns, we can trade either a breakout or a pullback with the ascending triangle. The standard way to open a position is to enter the market when the price breaks the resistance level for the ascending triangle (buy), the support level – for the downtrend (sell short), and the trend line – for the symmetric one (up – buy, down – sell short). Stop-loss is set immediately behind the level or trend line. 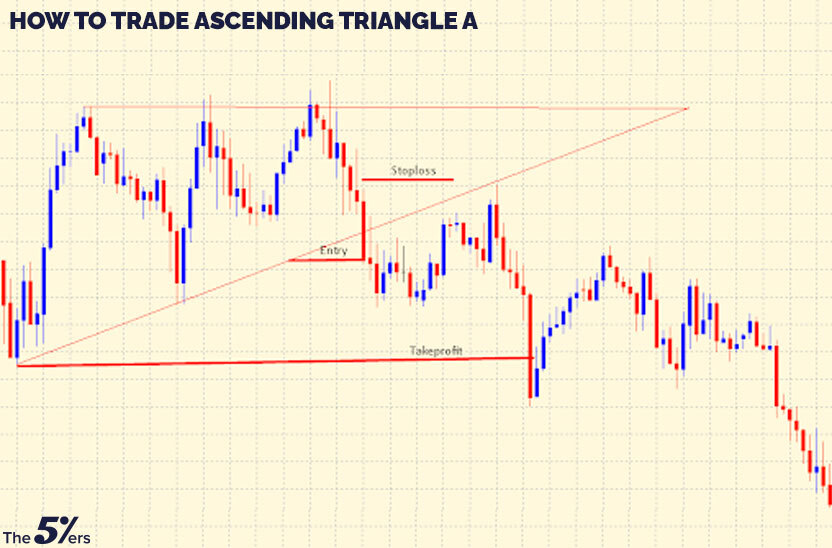 A conservative way to open a position – we wait for the first price pullback after a breakout, and only after that we enter the market. Set the stop loss in the same way. 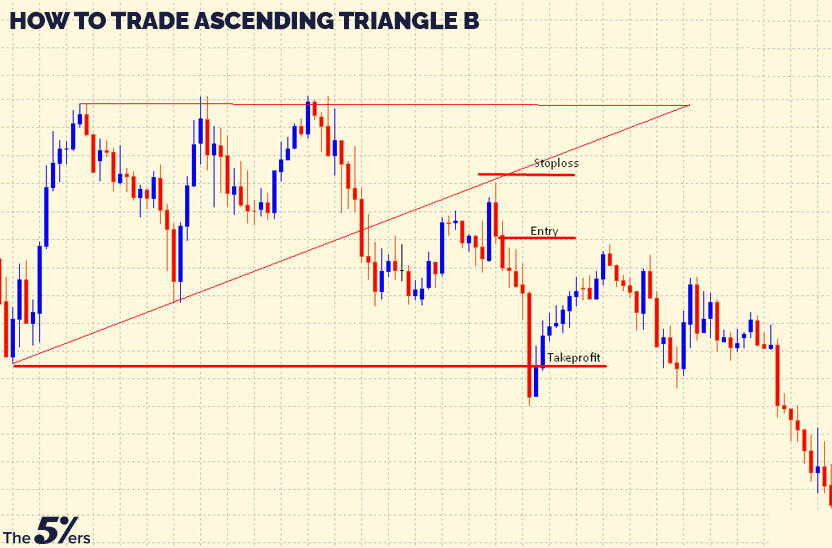 Don’t forget to control your trading volumes. At the moment of a breakout, they increase significantly and keep such dynamics as the trend continues. Also, do not place restrictive orders too far from the entry point. Better trade is that’s taken from the very beginning.

The pros and cons of ascending triangle

Learn Why Traders Can See the Same Chart Differently
How to Spot Trend Exhaustion Without Using an Indicator
Finding the Confidence in your Trading Strategy
Why the Trading Profession is One of the Most Challenging Professions
Trading Strategy as a Reflection of your Personality
Order Flow Analysis - The Secret Weapon of The Professional Traders
Follow us: