A quick guide to trading drawdowns’ definition and common use

According to Merriam-Webster, drawdown is the process of depleting. In financial terms, we’re going to add to the simple definition and further define it as a measurement of any performance and how much it can absorb a loss before it goes into profits. Trading drawdown is related to a single position where you enter the position and the price may go against you and put you in a relative loss before going up once again.

It is also used to be measured on a whole portfolio where you take the winners and the losers together to determine what was the highest sequence of accumulating losses in the portfolio.

Nowadays, the term drawdown is also associated with Prop Firms that provide financing to traders. Later in the article, we will also explain all about the forex drawdown in a prop firm context.

A Fancier Way to Say Losses

In financial markets, there are 2 types of equations (trading drawdowns) that are usually discussed. There is the absolute drawdown and there is the relative drawdown and each calculation is relevant to a different class of investors.

Investors who are not actually measuring performance and are only concerned with bringing returns only care about the absolute drawdown, whereas a trader who should always be considering his or her performance efficiency should care more about relative drawdown. These traders will tend to care more about how much they can risk as opposed to the initial investment amount. 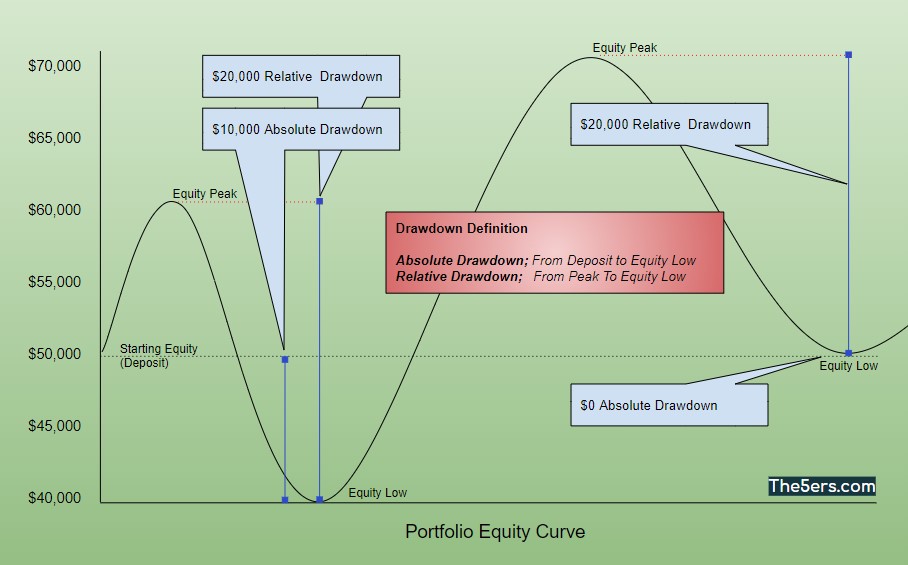 The determination of this first type of drawdown begins where the pivot point is at the highest peak of the value of the portfolio. For example, if you have a 50k account and you make it up to 55k but then fall down to 40k, then the drawdown is counted from the 55k to the 40k.

The trading behavior is capable of making that consecutive loss from 55k to 40k which is greater than a 20% change.

For the absolute drawdown, the pivot point would instead be from 50k to 40k which is only a 20% change. This is the main difference between the two types.

Applying it to a Trader’s Risk and Skill

On the other hand, if we want to measure the skill of the trader on this account, this trader managed to make 20% but they also managed to lose it in consecutive trades. This tells a lot about the way the trader handles money. It tells analysts that the trading style is capable of losing 10k from the 60k portfolio.

It’s very important to understand your trading style to determine the maximum risk you’re willing to maintain in the strategy.

If you were an investor doling out money, you would probably be more interested in absolute drawdown. What you’re expecting is an outstanding performance from the pivot point which is your initial investment.

On the other hand, if you’re a trader, you’ll always need to measure yourself statistically, from a relative drawdown. From any given point, your strategy combined with your trading manners is capable of making that amount of possible loss. This will define how risky your strategy is. This is very important to measure and work on so you’re always aware of your possible risk.

Today, traders looking to leverage their growth can join a Prop Firm.

Every prop firm has its own trading drawdown rules, i.e., how much a trader is allowed to lose before his account is terminated.

In addition to the percentage that traders are allowed to lose, there is the type of trading drawdown, either absolute or relative.

The type of drawdown is very important. The relative drawdown in the prop firm context is very misleading, so you need to pay attention to the differences.

Relative Drawdown means that the amount of money that the prop firm allows you to lose will never change.

For example: if you joined a prop firm that allows you to lose $5000, with relative drawdown, on a $100K account, then your termination level would be $95K (5%). If you started well and profited to $105K, your drawdown trails and remains $5000, which means your account will now be terminated at $100K.

This is why most traders don’t like this type of drawdown and consider it a trap. Because your drawdown percentage is always fixed, you will always feel the pressure of losing the account, which could lead to trading mistakes.

The big advantage of Absolute Drawdown is that your DD can grow.

In fact, even though in this example, you start with only a 4% drawdown compared to 5% in the previous one, in a prop firm with an absolute drawdown, you have an option to get a higher drawdown as your account grows. This takes out pressure from the trader, allowing them to be more successful in trading.

The5ers trading fund offers absolute drawdown when it comes to bringing traders on board.

We have no intention of setting traps for traders, and our goal is for traders to be calm and able to concentrate on trading.

Of course, thanks to our growth plan, the drawdown increases as the trader passes on levels.

The traders could always decide whether to withdraw all profits or just part of it to enjoy a higher DD, and this is exactly one of the big advantages of Absolute Drawdown.

Absolute and relative drawdown has got a different connotation since the raising of online prop firms.

Even though knowing your own relative drawdown as a trader is important for measuring performance when choosing a prop firm to work with, you better want to choose a firm that offers absolute drawdown. A relative drawdown on a prop firm will put a lot of stress on traders, leading them to ultimately lose the account.

Swing Trading vs Day Trading - Which Setup is Right for You?
Why Are Cross Currency Pairs so Volatile?
6 Character Traits to Develop or Refine Your Day Trading Career
How Retail Sales Affect The Forex Market
Tricking Your Brain Into Better Forex Trade Management Decisions
How the GDP affects the forex market?
Follow us: